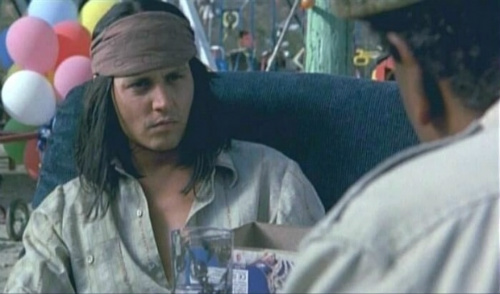 At the 1997 Cannes Film Festival, the directorial debut of Johnny Depp premiered: The Brave. He was wearing a lot less bracelets and rings at the time so handling a movie camera was no problem. Adapted from a novel by mystery writer Gregory Mcdonald (creator of Fletch!), the film is a slow-burning meditation on the importance of family and community and bandanas. To date, it’s the only feature film Depp has directed (he currently has a doc about his spirit animal Keith Richards in the works) and it never played in the USA because Depp was so outraged by the American critical response to the showing at Cannes he vowed never to release it in the states. It’s been released overseas in theaters and on DVD – the version I saw was a rip from the Spanish DVD.

Depp plays Raphael, a Native American who is facing some harsh times, which usually comes with the territory of being a Native. He’s an alcoholic. He can’t provide for his wife and two kids. His rubbish heap community is going to be bulldozed and he can’t do a damn thing about it. Raphael learns of a job opportunity that will put his family on easy street – even if it means he has to die. Marlon Brando is making a snuff film and he wants Raphael to star. *record scratch* Yeah, Raphael agrees to be tortured and killed in a Brando-directed snuff film, in return for $50,000.

He gets the cash up front and is given one week before filming starts and his life ends. Raphael uses his final days on earth to raise the spirits of his doomed community and give his wife and kids the attention and happiness the bottle took away from them.

The first 30 minutes of the film feel like the work of a veteran director at the top of his game – one who hasn’t been dressing like a lesbian pirate for over a decade. Unfortunately, the near-perfect first act is the best the film has to offer and the 90 minutes that follow are paced so poorly that the entire work suffers. My eyes begged me to quit. There are moments peppered throughout that are incredibly moving – Depp falls in love with his wife all over again and turns his land into a playground for the neighborhood kids – but they sadly don’t make up for the numbness of the rest of the film. The tension that builds during the first act is slowly released when it should have remained tight. At times it feels like Depp showed up on set in character and, like Raphael trying to find himself, tried to find his movie.

The film is made tolerable by the acting and Iggy Pop’s original score. Brando (like most of his later roles) is utterly confusing and hypnotizing as the producer of the snuff film. Marshall Bell (Total Recall) is menacing as hell as Larry, Brando’s assistant. Luis Guzman pops in as a would-be pimp and Clarence Williams III (Tales From the Hood) turns in a great role as Father Stratton, Raphael’s priest.

Then there’s the gleefully nonsensical role of Chuck E. Weiss as “Whizzy.” Fans of Tom Waits should be familiar with Weiss – Waits covers his sad bastard ballad “Rains on Me” and he’s mentioned a few times in Waits’ lyrics. In The Brave, Chuck E. has about a total of one minute on screen, but it’s genius. He sits in Brando’s ominous waiting room, making noises at Depp and spitting sunflower seeds. I want him to live in my kitchen and do that forever.

And I want Depp to trade in all of his shell necklaces, earring, and 90lbs of bracelets he wears everyday and somehow release The Brave. Or get behind the camera again. So much bold creative ballsiness is on display here I can’t help but wish he got to make more films and refine his chops as a filmmaker.