Post-war disillusionment is often noted as one of the overall themes of film noir. A soldier returns from war to be greeted by a sardonic American society not worth fighting for – that’s a broad example. Austro-American director Fred Zinnemann’s hopelessly grim thriller Act of Violence takes on this disillusionment fist-first, with a tightly-wound reversal of the good guy/bad guy set up that barrels forward to its ill-fated climax. Heightened by six terrific performances, this dark little film offers a bit of redemption at the end, though not without a price.

Van Heflin of 3:10 to Yuma fame stars as Frank Enley, a WWII veteran harboring a cowardly secret. Frank is the only member of his outfit to survive a German POW camp. The rest of his fellow soldiers were shot down during an escape attempt. After the war, he moved his wife Edith (Janet Leigh) and child across the country to the CA town of Santa Lisa. What is he running from? There he is a respected member of the community and a war hero in the eyes of many. It’s an idyllic domestic situation simply begging to be fucked up.

Enter Joe Parkson (a wickedly stone cold Robert Ryan), another veteran who, unbeknownst to Frank, also survived the same POW camp. Joe knows Frank’s secret – a chicken-hearted betrayal that left Joe with a gimp leg and all of their other comrades dead. Joe pursues Frank across the country, finally locating his home address in Santa Lisa.

He first tries to kill Frank out on a lake, where he’s gone on a fishing trip with one of his new CA buddies. This passage is really great – it takes noir sensibilities out into the forest and on the water, in broad daylight. There’s a wicked shot of Joe hiding in his rowboat behind a large rock out in the water. Frank’s in a powerboat, steering it right into Joe’s trajectory. I held my breath at this point. It’s like 10 minutes into the film, so of course he doesn’t plug Frank this early. But still, it’s an intense scene.

Frank catches wind that Joe’s in town sniffing around for him, so he cuts is fishing trip short and returns home. Now THIS scene is fantastic visual noir. He won’t tell a terribly concerned Edith why he’s home early, or why he’s going around the house closing all of the drapes and switching off the lights. He’s frantic, but leaving her in the dark as to why. It takes a lot for a coward to confess his wrongdoings, and Frank’s hasn’t reached that point yet. 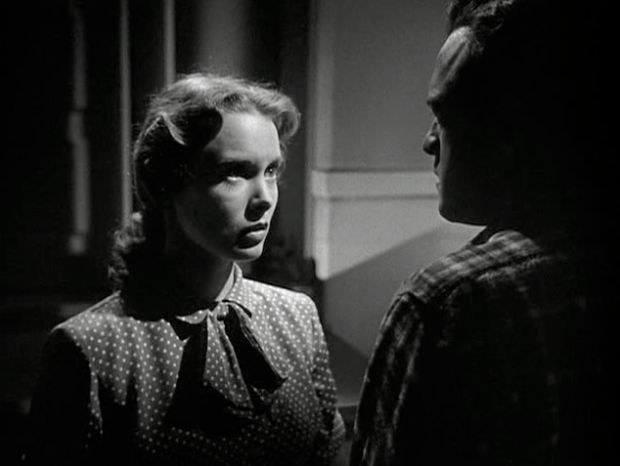 Zinneman’s direction and Robert Surtees’ cinematography in this tense scene are pure perfection. The house is so dark, light emanating from only a couple of kitchen lights. There’s one amazing take where the camera slowly pans from the huddled couple to the back door. We can hear Joe’s crippled gait getting closer, then he’s at the door as the camera zooms in on the doorknob, which begins to rattle. This is some precise, gripping filmmaking. Zinneman maintains the stranglehold throughout the entire film. From here on out, there’s no relief from the darkness consuming Act of Violence.

Janet Leigh plays the anxious, terrified wife really well. It’s not a particularly great performance, just appropriate. Joe’s girlfriend Ann is played with an air of intelligence and compassion by Phyliis Thaxter. But the lady who really steals the show is Mary Astor (that cunning bitch Bridget O’Shaughnessy from The Maltese Falcon), who plays streetwise hooker Pat. Frank goes to her for help when he’s at the end of his ropes, on the run in Los Angeles. She introduces him to man of all shades Johnny (Berry Kroeger), who comes up with a scheme to take out Joe. Their ambush turns out to be Frank’s moment of redemption. But in doing so, he robs Joe of the justice he longed for.

Act of Violence successfully blurs the murky lines between good and evil. It’s an ethical tug of war between a man determined to kill for his sense of justice, and a man who tragically screwed up in the past, now looking to redeem himself through acts of charity. Zinneman would direct High Noon a few years later, but there’s evidence of his western influence here – including a classic western duel on main street. This one’s pretty much flawless (and only about 80 minutes). I confidently recommend it to any crime fans. Watch it and root for the good guy, or the bad guy, because they’re pretty much the same guy.