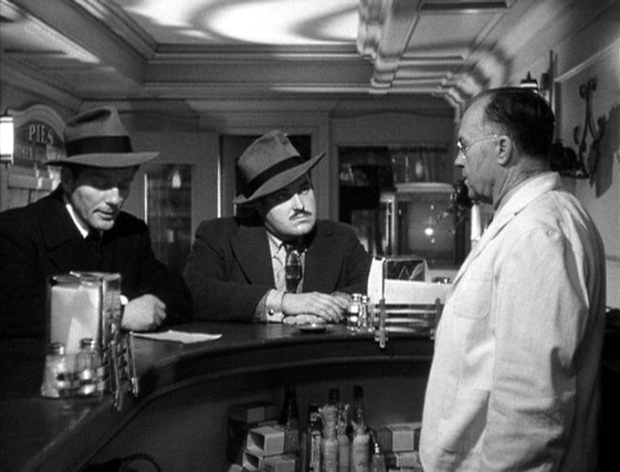 I planned on holding off my thoughts on Robert Siodmak’s The Killers for a while just because it’s such a quintessential noir. And because I knew I would have a lot to say about it. But my plate was clean today of freelance work, so fuck it, let’s rumble. Honestly, guys, this is the Citizen Kane of film noirs. Adapted from the short story by Ernest Hemingway (arguably the granddaddy of the hard-boiled school of writing), The Killers is an exemplary example of Siodmak’s refined blend of Hollywood talent and German expressionistic leanings. The character played by Burt Lancaster also strongly defines the classic Hemingway hero who accepts his fate in the face of death.

The Killers opens with 15 minutes of “the killers” terrorizing a diner in Brentwood, New Jersey. The titular fellas are played by Charles McGraw and William Conrad and hot damn are they an irritable duo. They’re at the diner looking for “The Swede,” which is the nickname of Ole Anderson, played by Burt Lancaster (in his film debut). This opening is tough to beat. It adheres to Hemingway’s story (minus the use of the N-word) in which the two killers berate the proprietor of the diner, the cook, and a patron. They rhythmically refer to everyone as “bright boy”, openly admit they’re in town to murder the Swede, and don’t even touch their eggs. It’s like they’re trying to amuse each other by taking the piss outta everyone.

The Swede never shows up, so the killers head out to locate him. Once they leave the diner, the patron darts over to the Swede’s place to warn him. Instead of running, the Swede just stays in bed, accepting his fate. “I did something wrong once,” is all he says. After he’s killed (“nearly torn in half” by so many bullets), the film becomes a series of flashbacks and fractured narratives concerning what led up to the Swede’s death. The structure can be compared to Citizen Kane, reinforcing what I said earlier. The inquest is curated by insurance investigator Jim Reardon, played by noir everyman Edmond O’Brien.  He speaks with a lineup of figures from the Swede’s recent past, including his belle Kitty Collins (Ava Gardner) and former cellmate Charleston.

Through his investigation he learns that the Swede was involved in a payroll heist a while back, in which a shitload of cash was stolen from a hat factory. The heist is shot in one gloriously choreographed take, using a crane to show the second story robbery and subsequent getaway. The job was put together by Big Jim Colfax, a double crossing S.O.B who beats on his wife (Kitty, at the time). Also involved with the heist is Dum Dum Clarke, played with a staggering amount of menace by Jack Lambert. Every criminal gang needs some muscle and Dum Dum is their raging pectoral. His face exudes the “I don’t give a fuck” attitude of an ex-con, drowning every scene he’s in with tight anxiety. The entire cast is top-notch, but the killers and Dum Dum stand out as particularly bad dudes.

As for the Swede, Lancaster plays him with effective carnal stupidity combined with stubborn machismo. When he first meets Kitty at a party thrown by Big Jim, he’s literally stunned by her beauty. He stands right over her shoulder as she sings “The More I Know of Love”, mouth agape, eyes wide – like a child walking into the living room on Christmas morning. In another scene, he wakes up from a nap to exclaim “I fell asleep!” He may be dumb, but he’s also got a big heart. The beneficiary of his life insurance payoff is an elderly woman who worked in a hotel he stayed at. She stopped him from committing suicide, and although she hasn’t thought about him much since he tried to jump outta window, the Swede never forgot her. His compassion and “Aw shucks” innocence makes him a sympathetic character. Lancaster worked with Siodmak again in 1949’s Criss Cross, in which he also plays a lovable galoot.

As author Stuart M. Kaminsky notes in the interview on the Criterion DVD release of The Killers, it’s interesting that nobody changes whatsoever in the movie. This is in contrast with Don Siegel’s 1964 version of The Killers*, starring Lee Marvin and Clu Gulager as the titular hitmen. In that one, Lee Marvin’s Charlie has a change of heart by the end of the movie. What he’s learned “enlightens” him a bit, causing him to shift his attitude towards his victim. In Siodmak’s film, nobody learns a damn thing. O’Brien investigation into the Swede’s life and the payroll heist leads to nothing but more death and a change in insurance premiums.

The inability for anyone to change is frustrating, sure, but also reinforces noir’s fatalistic cynicism. Once the mystery of Swede’s acceptance of death is revealed, that’s all she wrote. He’s dead and buried. He doesn’t matter anymore. On to the next insurance investigation.

The film’s climactic shootout in the Green Cat nightclub is a visually disorientating sequence in which the ttitular killers make another appearance. The use of mirrors in this scene is great, especially when Kitty reacts to what she sees in a reflection. It’s never clear if she signaled the men or was simply unsettled by their appearance. This ambiguity of motivations adds to the insecurity and paranoia that’s such a strong motif in noir. The Killers, along with Siodmak’s Criss Cross, are the blueprints of subsequent traditional film noirs. Dig them if you have the chance!

* I see-saw between loving the Siodmak version more than Siegel’s, but I’ve watched the Siegel version more times because I find scenes shared by Lee Marvin and Lu Gulager to be relentlessly entertaining. Gulager is such an underrated actor and here he plays a charming, funny psychopath that wins my heart every time. I’ll write about this version of The Killers at some point, I’m sure.

1. The Killers
2. Criss Cross
3. The Spiral Staircase
4. Phantom Lady
5. Cry of the City
6. The Dark Mirror
7. The Strange Affair of Uncle Harry
8. The File on Thelma Jordon
9. The Suspect
10. Christmas Holiday