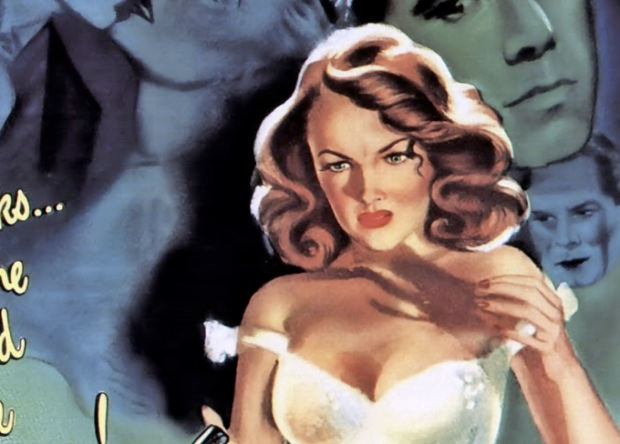 I figured I’d round out 2013 with a New Year’s Eve-centric caper. Repeat Performance came across my radar during the Christmas crime week and I read that it takes place on Dec. 31, so there ya go. Perfect. It’s a pretty good fantasy-noir hybrid, kinda like Groundhog’s Day but set over a year instead of a single day. The plot is pretty cool: a woman gets to relive the previous year in order to right some wrongs that led to her shooting her husband. But Repeat Performance goes a bit over the top for my tastes and it can be painfully melodramatic at times. There is some great stuff going on about predestination and challenging fate, but overall the whole film failed to entertain.

Joan Leslie stars as Sheila Page, a successful stage actress – a true darling of Broadway. As the film begins, she’s ringing in the new year by shooting her drunkard husband Barney. There’s a party raging the floor below, and Sheila tears through it in a panic. One of the party guests is Richard Basehart, who plays a poet named William Williams. That is the most poet-ass name I’ve ever heard.

Eventually she flees to her producer. On her way up the stairs to his office, she wishes she could live 1946 all over again. Her clothes change, the lights flicker, and voila…she gets her wish. It’s never explained how this magic happened, but who cares. Did anybody really care how it happened to Bill Murray? Or how Fred Savage and Judge Reinhold really switched bodies in Vice Versa? Actually, I think that’s clearly explained in the movie. Some kinda magical totem, right?

Anyways, it’s the start of 1946 all over again and Sheila gets a chance to redo all the drama that led to a year of infidelity, jealousy, and murder. Ya can’t fuck around with fate though and Sheila soon realizes that despite her efforts, a lot of the same shit that happened the first go-round occurs again. The film climaxes on New Year’s Eve, where Sheila once again finds herself having to decide to plug Barney or let the drunk-ass go on living.

I wasn’t really captivated by all of the melodrama that goes down before the climax. There’s an inordinate amount of drab moments where Sheila is begging Barney not to do this or that – her way of trying to fix past mistakes. But Barney is a slob, a drunk, so he doesn’t listen to anyone but the bottle. It quickly gets tedious watching her plead with him over and over again. I only stuck around because I wanted to see if she’d kill him again.

I really did like the ending – it’s got a nice twist I didn’t see coming and is effective in its thoughts on predestined fate, which is a staple theme of noir. It’s only the bad fates you can’t escape though, never good ones. Other noir notes in Repeat Performance include director Alfred L. Werker dark and stylish atmosphere, which is at its strongest during the film’s bookends.

To a point the climax makes up for the fluffy middle, though fans of noir may want to check Repeat Performance only after they’ve exhausted the classics. I wish I had more to say about the film, but, meh. It didn’t really do much for me.