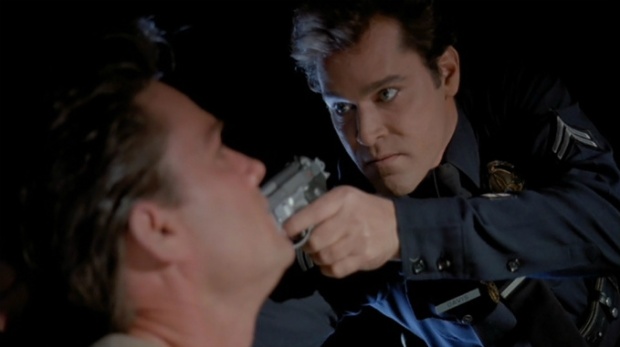 Before the review, I wanna note that Jonathan Kaplan, the director of today’s film, Unlawful Entry (a reworking of yesterday’s film The Prowler), also directed the underrated 1979 juvenile delinquent tale Over the Edge. I named this blog after the fictional housing development where that film takes place: New Granada. So yeah, that’s pretty cool. Kaplan has had a pretty versatile career, which includes the mighty trucksploitation film White Line Fever and lots of Law & Order: SVU episodes. And the guy’s still working well into his ’70s. Here’s to you, Mr. Kaplan.

END_OF_DOCUMENT_TOKEN_TO_BE_REPLACED

Some cops bend the law for money. Some do it to uphold their uptight version of society. Others, like Webb Garwood in The Prowler, do it to achieve their dream of a house in the ‘burbs with a nuclear family. Middle class aspirations that a cop’s salary won’t allow. He could’ve easily fit in with the riffraff he throws behind bars, but as he explains to Evelyn Keyes, the badge just makes it easier to be a bad person, which makes for an easier path to the good life. Joseph Losey’s The Prowler centers around this particularly despicable corrupt cop, as the film takes the formula laid out in Double Indemnity and throws a bit of sand in its eyes to create its own brand of domestic hell.

END_OF_DOCUMENT_TOKEN_TO_BE_REPLACED

Yesterday we looked at Melville’s Bob le flambeur – a film that saw the French crime maverick developing the style and motifs he’d eventually refine in his classic gangster cycle. Today we’re jumping forward in time to his final film, Un flic (A Cop), which was released in 1972 – one year before the filmmaker’s premature death. Here Melville seems to be fetishizing and embellishing the trademark touches he developed late in his career: meticulous heist sequences, minimal dialogue, long glares, homoerotic undertones. All these elements are presented to an almost absurd degree. The result is a visually fascinating caper that frustratingly lacks the emotionally engaging sacrificial gut punches of his classics.

END_OF_DOCUMENT_TOKEN_TO_BE_REPLACED

Jean-Pierre Melville and Auguste Le Breton wrote Bob le flambeur back in 1950, but they shelved it due to the release of The Asphalt Jungle – the grandpappy of American heist films. I’m not sure if they pushed it aside because they didn’t want to compete with another caper film, or if Melville was so impressed with Jungle that he decided to beef up Bob. Either way, Bob le flambeur went through some rewrites, with Melville aiming for a comedy of manners directed at the underworld. The intricacies and relationships of Parisian riffraff are shown in glorious detail, and the film seems to mourn their downfall.

END_OF_DOCUMENT_TOKEN_TO_BE_REPLACED

Now here’s an interesting caper: Edward Dmytryk’s The Sniper. This dark tale of male rage was a product of the later noir cycle, when the root problems of violence began to be examined on a psychological level. It’s about a veteran whose mother didn’t love him and who now desires women on a violent level. The film was pulled from release prematurely due to its graphic violence (which even stunned a hardened film viewer like me in 2014), and sort of faded into obscurity after that. It’s a shame it’s not more well known, since it’s an obvious precursor to films like Dirty Harry and Taxi Driver.

END_OF_DOCUMENT_TOKEN_TO_BE_REPLACED 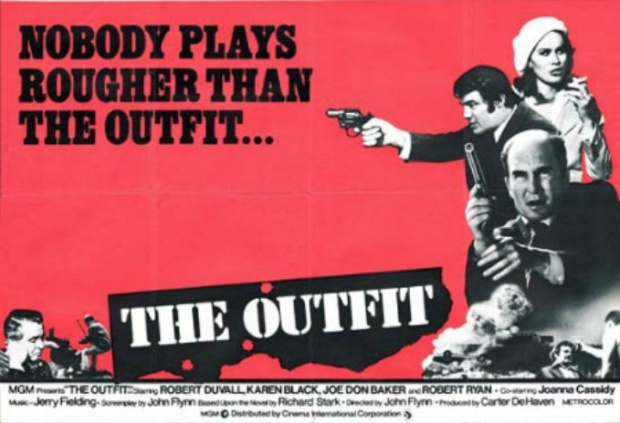 I became obsessed with the novels of Richard Stark (pseudonym of Donald Westlake) about a year ago. By mid-2013, I had read all 16 novels in the original series revolving around career criminal Parker. There’s not a bad one in the lot. I love the economic prose and the toughness of the Parker character. They’ve made a few films based on the series, some bad, some amazing. Here’s a look at one of the (better) film adaptations of a Parker novel, 1973’s The Outfit.

END_OF_DOCUMENT_TOKEN_TO_BE_REPLACED

(No not the Arnold Schwarzenegger action flick from the ’80s)  Raw Deal is a pretty underrated gem of the classic noir cycle. It was made the same year as T-Men with many of the same principal talents. While that film had a social realism thing going on, Raw Deal goes right for the hypothetical throat. It’s a tale of betrayal amongst a group of crooks and the two women who strive for the love of Joe (Dennis O’Keefe). On the surface it reads like a standard revenge story, but thanks to director Anthony Mann and DP John  Alton, Raw Deal plunges into a hallucinatory realm of violence and cynicism that’s as disenchanted as the hardest noirs oughta be.

END_OF_DOCUMENT_TOKEN_TO_BE_REPLACED 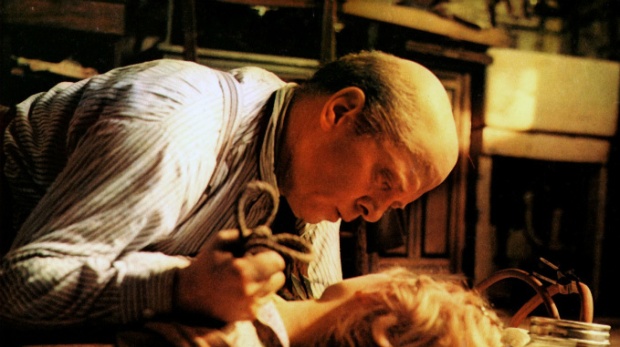 Based on the true story of UK serial killer John Christie (Richard Attenborough), who during the 1940s and early 1950s murdered at least eight women, 10 Rillington Place is a mercilessly dark and unconventional film. Christie would rent out rooms in his building as a front for his murders and also hire prostitutes to bring back and dispose of. The film focuses on one particular killing, that of Beryl Evans (Judy Geeson), and the subsequent trial that wrongfully condemned her husband Tim (John Hurt) to death. If you’re looking for a feel-good movie, stay the hell away from 10 Rillington Place. END_OF_DOCUMENT_TOKEN_TO_BE_REPLACED

I had read in a blurb once that the post-war film The Blue Lamp was a “landmark” in the history of the British crime film. The writer stated that this is because it introduced the character of George Dixon, who came to represent the ideals of the British police force in the TV series Dixon of Dock Green (1955-76). What the blurb failed to mention was how much of a mediocre, cop ass-kissing film The Blue Lamp is. It gains a little steam during the second half, when the manhunt for a cop killer kicks off, but overall the film fails to explore the psychology of both its cops and criminals – resulting in a drab crime and punishment melodrama that had me ticking down its running time.

END_OF_DOCUMENT_TOKEN_TO_BE_REPLACED

The genius of Jean-Pierre Melville’s Le Doulos is that either everything we’re initially led to believe was a lie, or everything Jean-Paul Belmondo says near the end of the film is the truth. The title of the film comes from French slang for “the hat,” which also refers to a police informant in underworld argot. Belmondo wears the hat for most of the film, but so does a slew of other characters. So who’s telling the truth? Watching this complex and tough crime drama, it really doesn’t matter. This is often argued to be Melville’s first pure crime film and damn did he come out swinging.