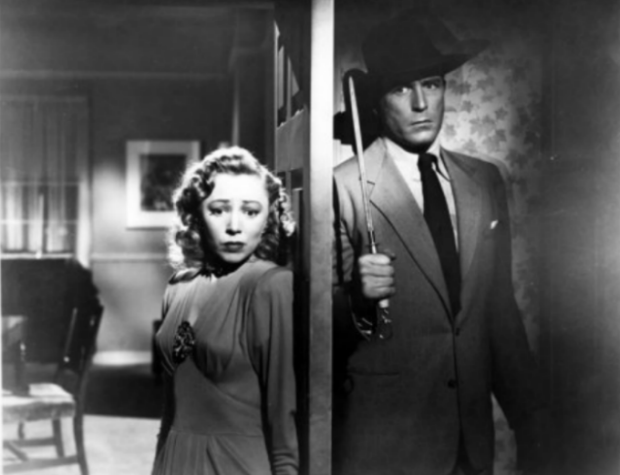 Born to Kill was the first noir directed by Robert Wise, who won an Academy Award two decades later for West Side Story. I haven’t seen any of his other noir work, but from what I’ve read, Born to Kill is his most malicious, scathing film. I believe it, man. This film is one venomous s.o.b., a bare knuckle uppercut that argues that humanity shares a collective bloodlust. Driven with a hardboiled performance by Lawrence Tierney, Born to Kill lives up to its gleefully direct title.

Our leading lady is Claire Trevor, who plays opportunistic dame Helen Brent. The same day she gets a divorce in Nevada, she discovers one of her neighbors, Laurie Palmer, has been beaten to death. Rather than report it, Helen flees the scene. Later she explains that she didn’t call the cops because she was traveling to San Francisco the same day and it would be too much of a hassle. The balls on this woman, huh?

Laurie was murdered by her boyfriend, Sam Wilde (Tierney), who didn’t appreciate her having a lover on the side. The murder scene is amazing and brutal as hell for its time. Wilde first beats the lover to death in the kitchen while jazzy swing music plays on the radio. Then he hides behind the door until Laurie enters. In a few seconds, there’s two corpses laying on the linoleum. To his credit, Sam did give the lover a chance to get out, but then the smug prick pulls a blade on him, so a throwdown becomes inevitable.

You can tell Sam wanted a fight though. He’s got insatiable sadistic in him, and letting it out clearly arouses him. Tierney is perfect in this role. He has one of the coldest mugs I’ve ever seen in film. I think for a lot of people my age (early 30s), our first experience with Tierney was in Reservoir Dogs. In that film he was grumpy and kinda funny, but in Born to Kill he is a force of fucking nature.

On her train ride to San Francisco, Helen runs into Sam. She quickly becomes infatuated with him, but she must dismiss his bold advances because she’s engaged to a wealthy society man – her well dressed meal ticket. In San Francisco, Sam shows up unannounced (and uninvited) to Helen’s home, much to her chagrin. Instead of murdering everyone in the room, Sam sets his sights on the Georgia (Audrey Long), Helen’s future sister-in-law. Seeing a chance to get rich while staying close to Helen, Sam aggressively pursues marriage with Georgia.

The two wed, but Sam and Helen begin smooching on the side. When she reveals that she discovered the bodies of Laurie and her lover, Sam gets a huge boner. The two are kindred spirits in violence – sweethearts in savagery. Sam obviously has the more uncontrollable bloodlust, and Helen manipulates him into doing her murderous bidding. A private detective and Sam’s old gangster friend (played by the almighty Elisha Cook Jr.) get into the mix – creating a volatile progression of brutality and conspiracy that climaxes on a stack of corpses.

Born to Kill is a grim noir about the darkest sides of humanity. Visually the film is just as bleak. Wise adds some nice expressionistic touches to his shots – imprisoning his players in the shadows and even making a decadent parlor seem menacing. After watching this bad boy, my eyeballs are begging me to check out more of Wise’s film noirs. Be on the lookout!