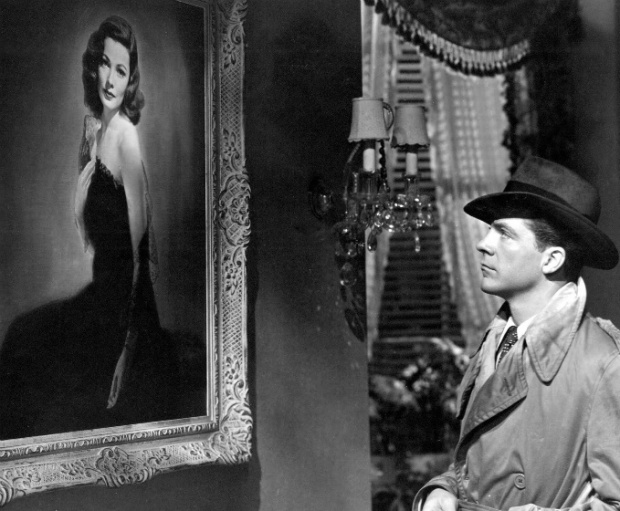 Buckshot will do nasty things to a person’s face. Just ask Laura. It could make them unrecognizable, sparking a murder investigation of the wrong body. Such is the surface plot of Otto Preminger’s celebrated noir Laura. Originally intended to be a play based on Vera Caspary’s novel of the same name, Laura is a classic choking with malice and trickery, played out with slick grace. It’s a murder mystery like no other – one in which every single person (besides the detective) could be the culprit. This means it doesn’t really matter who it is. Does that make sense? Aw hell, just enjoy the ride.

A convoluted plot is a trademark of noir and Laura might just take the crown. We begin with the titular heroine already dead. Detective Mark McPherson (Dana Andrews) is at the lavish apartment of suspect Waldo Lydecker (Clifton Webb), a newspaper columnist known for his cheap gossip and snobbery. Lydecker claims he was in love with Laura (Gene Tierney) and wanted to help her succeed in the male-dominated world of advertising.

As McPherson knocks out questions to him, it’s clear that this is a detective who doesn’t beat around the bush. He speaks in a highly droll manner, rarely looks up from his pad during questioning, and plays with one of those roll-the-balls-around-and-try-to-get-them-in-the-hole-games when he needs to concentrate. He’s not so much hard-boiled as he is dryly amusing.

The other main suspect is Laura’s fiancé, Shelby Carpenter (Vincent Price). He’s a real “aw shucks, detective” kinda guy, so I didn’t trust him from the get go. Neither does McPherson, particularly when Shelby reveals he’ kept some information out of his original police interview.

Through a series of flashbacks, Shelby and Lydecker tell their interpretations of the days leading up to Laura’s death. Both have a severe case of “untrustworthy narrator.” Everyone here except McPherson is full of shit. Even Laura’s housekeeper. Even Laura herself. She’s not even dead! I don’t consider this a spoiler since the movie is almost 75 years old. There’s gotta be a five decade statue of limitation on spoilers.

Laura doesn’t make an appearance until about halfway through the film. That scene is amazing. Through the course of his investigation, McPherson has been falling for Laura (even though he thinks she’s dead). He never goes back to the police, setting up camp instead in Laura’s apartment, where he can drink her booze and go through her diary. When he’s around Shelby and Lydecker, he acts detached from the case. But it’s in these moments at Laura’s apartment where he can’t mask his compassion for her.

On the third night of the investigation, McPherson falls into an alcoholic induced slumber beneath the enormous portrait of Laura – a framed work of art that dominates the entire living room. Until this point this film is shot very coldly. This scene breaks from that pattern to inject loads of dark style. It’s an incredibly composed shot – one that somehow makes the living room larger than it actually is. Really stunning stuff. This scene and the climax in which the killer is revealed are loaded with noir sensibilities.

While McPherson is a cold and calculating character, Lydecker won’t shut the hell up. He’s quick with a pompous quip and although he’s a dick, is really the heart of the film. Gene Tierney as Laura seems unemotionally involved in both her love triangles and the investigation into who was really murdered in her apartment. She also has no chemistry with any of the other actors, especially Clifton Webb, who was twice her age (she= 24 he=55).

The plot is as convoluted as a noir potboiler can get, but Preminger grounds it with precise direction and just the right amount of style.