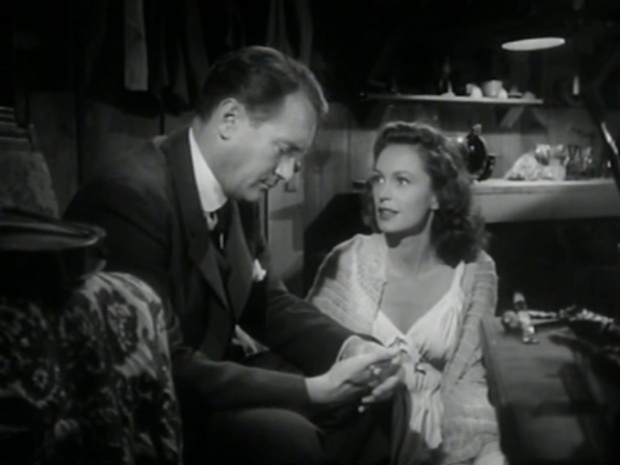 Robert Siodmak’s The Strange Affair of Uncle Harry has a goofy ass title, but it’s a seriously dark film. The final third in particular is a bleak take on the punishments repeatedly doled out in ’40s noir due to the moral censorship enforced by the Hays Code. But then, the final minute of the film occurs and…it’s mind boggling and frustrating and silly and I dunno man. According to the interwebz, the ending was tacked on to appease the Motion Picture Production Code. It’s a dogshit way to wrap things up, but up to that point the movie is fantastic.

In the quaint town of Corinth, Harry Quincy (George Sanders) works as a pattern designer in a fabric mill. It seems like the perfect job for a quiet man who wants to be left alone with rose petals and repetitive illustrations all day. He lives with his two sisters: Lettie (Geraldine Fitzgerald) and Hester (Moyna MacGill). Lettie is a domineering sister who wishes to control every aspect of Harry’s life. She stays in bed all day, faking illness. Hester is a high-strung widow who frets a lot, but feels that Harry should get out and enjoy life more often. The two sisters have a passive aggressive tug-o-war going on for Harry – Hester wants the best while Lettie never wants him to leave the house, where she can have him all to herself. Not in a sexual way, she’s just clingy and afraid of being left alone.

A New York rep for the fabric company comes to town and throws Harry’s world topsy turvy. Ella Raines would have that effect on me as well, I’m sure. She plays Deborah, an elegant woman who quickly falls for Harry. Soon the two are engaged, much to Harry’s delight and Lettie’s chagrin. She attempts to fuck up their engagement at any cost. Eventually on the day Harry and Deborah are to leave town to get hitched, Lettie fakes a dreadful illness so that he will stay home to look after her. This is the last straw for Deborah, who bails on Harry, right into a more willing suitor’s arms.

Once Deborah leaves town, Lettie’ truly bitch ass nature shines through. All of a sudden she’s feeling better and in much higher spirits. Hestor knows she intentionally fucked up their engagement. So does the saucy housekeeper. And so does Harry. Broken, desperate, and spiritually weary, Harry decides to end Lettie’s reign of terror once and for all. The plan goes terribly wrong, however, leading to unintentional murder and execution.

Or does it? In the film’s final minutes, Siodmak erases everything that happened during the film’s final act. It’s a bitch move he was forced into. The third act is SO dark and tough too – it includes my favorite bits. The first two acts are much more melodramatic and romatic, but the third act is reminiscent of Siodmak’s doomed protagonist in Criss Cross. Ah well. I suggest turning the film off before the final minute or two. Right when you see Harry sitting in his armchair with the bottle of poison, turn that shit off.

1. The Killers
2. Criss Cross
3. The Spiral Staircase
4. Phantom Lady
5. Cry of the City
6. The Dark Mirror
7. The Strange Affair of Uncle Harry
8. The File on Thelma Jordon
9. The Suspect
10. Christmas Holiday