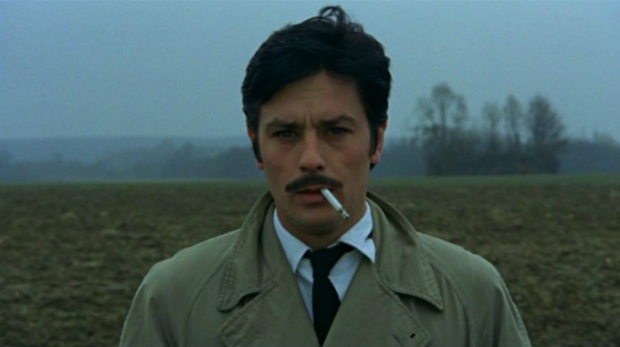 After making a string of highly acclaimed crime films in the ’50s and ’60s, unconventional French badass Jean-Pierre Melville created his epic masterpiece Le Cercle Rouge in 1970. I’m not calling it an epic because it’s 2.5 hours long, naw, I’m saying that because the film encompasses all of his beliefs concerning criminals, the underworld, and the police and presents them in one seamlessly controlled narrative. Like Rififi 15 years before (which Melville was originally attached to direct), Le Cercle Rouge is centered around a heist. It’s planning, execution, and fallout are depicted in detail, also like in Dassin’s film. Melville’s film takes a closer look at all of these aspects though, all while exploring the masculine romanticism and codes of honor that he obsessed over.

The film opens with a Buddhist epigram explaining how people who are destined to come together will do so in the red circle (or something to that degree). This visual cue is repeated a few times in the film, both subtly and explicitly, like when Corey traces a red circle around the tip of his pool cue. Melville’s the only one who can answer what the importance of the red circle is, what he interpreted it to be, but a solid guess would be a message (or warning) about a doomed fate, which is one of the pillars of noir.

Corey is played by French super hunk Alain Delon, whose expressive blue eyes combat with his scowl and mustache. The day before he’s released from prison, a screw tells him about a lucrative job that cold set Corey on easy street for life. It’s a high-end jewelry store ripe for the plucking. The type of place were you have to be buzzed in through three different doors before even getting to drool over a bracelet that costs more than most countries’ GDP. Corey’s interested, but he’ll need to find help.

As luck would have it (or this titular red circle would have it), escaped convict Vogel (Maria Volonté) hides in Corey’s trunk. While being transported via train, Vogel managed to escape by picking the lock on his handcuffs then diving out a window while the train was still moving. It’s a terrific sequence, followed by a tense chase through the woods. It’s never said what Vogel did to wind up in custody, but it must be something horrible because he’s rabidly desperate to elude capture. He even strips down to his tightie-whities to lose the dogs at a river. Then he gets dressed again and continues his trek. Imagine running in wet clothes, not to mention wet shoes?! Wet shoes are the worst!

The first interaction between Corey and Vogel is one of my favorite parts of the film. It takes place in a wide open field, and the two just kinda stare at each other for a while. Melville shoots them in close-up, cutting quickly between them as they just stare. Finally, Corey offers Vogel a cigarette and the two become buds. For those few moments when they’re just staring, they connect on some kind of cosmic level – two criminals who share the same code of honor, brought together by Buddha’s magic red circle.

Vogel signs on for the heist so now all they need is an expert marksman who can shoot what seems like an impossible target – the hole of a tiny lock all the way on the other side of the jewelry store. Vogel suggests an ex-cop named Jansen (Yves Montand). When we first meet Jansen, he’s on the bad end of a bender – holed up in his room, mountain of empty liquor bottles bordering the bed, and spiders and reptiles coming out of his closet. He’s hallucinating, making i clear this guy is dealing with some volatile demons.

He takes the heist job not so much for the money, but as a challenge and a key to redemption – a way to rid himself of the bottle and his demons for good. There’s a very subtle, yet touching moment that cements his absolution: when his part of the heist is done, he pulls a flask out and doesn’t sip from it, he only sniffs it. Le Cercle Rouge is filled with beautiful touches like this.

I’d like to write more about the themes of brotherhood and masculinity in Melville’s work someday when I have more time. Particularly in this film, where your manhood isn’t defined by how many times you pull the trigger, but how loyal you are to your comrades. Melville had a fiercely defined view of what it meant to be a man on both sides of the law and he used his films to explore these ideals and faults. That being said Le Cercle Rouge should be considered his thesis film – a highly effective one at that in which sympathies fall for both the cops and robbers.

Also, he wore a stetson hat all the time and Le Cercle Rouge has no speaking parts for women. More on this later. 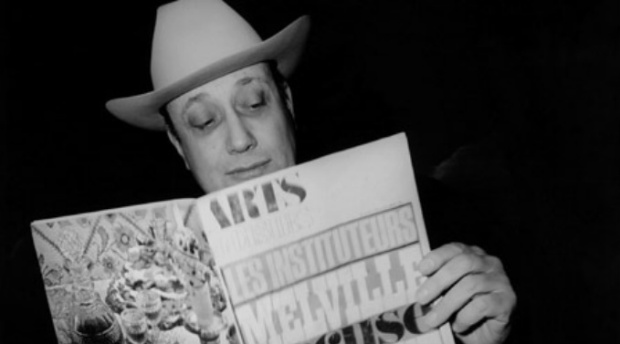