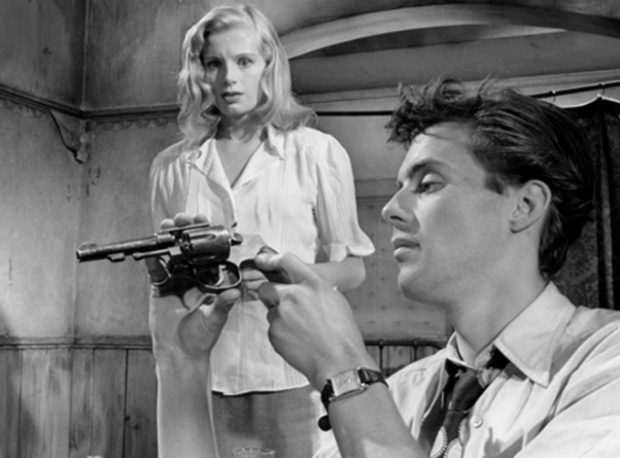 I had read in a blurb once that the post-war film The Blue Lamp was a “landmark” in the history of the British crime film. The writer stated that this is because it introduced the character of George Dixon, who came to represent the ideals of the British police force in the TV series Dixon of Dock Green (1955-76). What the blurb failed to mention was how much of a mediocre, cop ass-kissing film The Blue Lamp is. It gains a little steam during the second half, when the manhunt for a cop killer kicks off, but overall the film fails to explore the psychology of both its cops and criminals – resulting in a drab crime and punishment melodrama that had me ticking down its running time.

The title refers to the lampposts that still hang outside of some British police stations. They’re blue and look like lamps. A voice-over at the start of the film comments on juvenile delinquency after WWII and how most up-and-coming hoods were rejected by established underworld figures. To prove themselves, some turned to more hardened crimes, such as armed robbery. That’s where our antagonist, Tom Riley (Dirk Bogarde), finds himself – toting a revolver and a mask on his face. During his first robbery attempt, he winds up shooting copper George Dixon (Jack Warner), a very well respected officer in the area. No wonder the underwolrd wanted nothing to do with this nervous punk.

Leading up to the manhunt, The Blue Lamp takes an intimate look at British officers and their grueling work – putting their lives on the lines every day to protect the innocent. They perform duties like giving people directions to Paddington Station, escorting a little boy home, and dog-sitting. Then it’s time for choir practice. At times these moments are enjoyable in their depiction of the police as a surrogate family, but for the most parts it’s all a rather dull affair. Social realism? Sure, you could call it that. I call it fluffing out an 80 minute run time.

The killing of the cop sparks this bizarre unification between the underworld and the police force. As if these crooks would possess the same values as the police force they’re constantly at odds with. It’s the type of team-up similar to the one in M, but that one was fairly believable since no one wants a kiddie killer on the streets. The scene where they finally nab Riley is pretty cool though. He tries to blend into the crowd at a crowded dog racing track. It made for a tense, chaotic atmosphere.

The Blue Lamp is a bit too black and white morally for me. Without any real examination of the cop and criminal mindset, I loose interest quickly. For example, there’s something very sexual going on between Riley and his revolver, but it’s never explored on a serious level. The film is simply stating guns and sex are bad, coppers good. Barf.