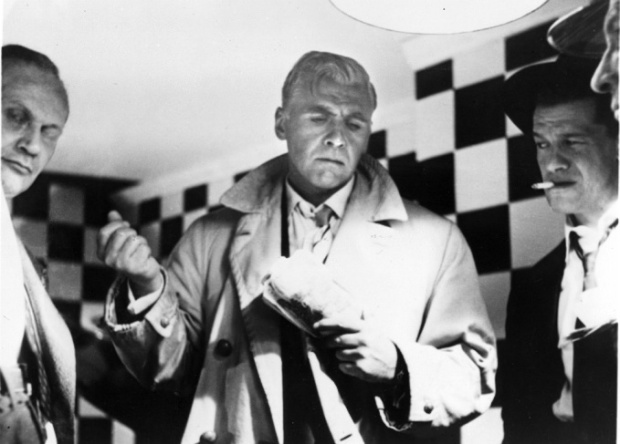 Jean-Pierre Melville and Auguste Le Breton wrote Bob le flambeur back in 1950, but they shelved it due to the release of The Asphalt Jungle – the grandpappy of American heist films. I’m not sure if they pushed it aside because they didn’t want to compete with another caper film, or if Melville was so impressed with Jungle that he decided to beef up Bob. Either way, Bob le flambeur went through some rewrites, with Melville aiming for a comedy of manners directed at the underworld. The intricacies and relationships of Parisian riffraff are shown in glorious detail, and the film seems to mourn their downfall.

Bob the high roller(Roger Duchesne) is an ex-con and habitual gambler who is never home before 6am. He’s so hooked on the thrill of gambling, that he keeps a slot machine next to his bed, in case he gets the urge for one more pull. Since he was released from prison (doing time for a bank robbery), he’s been keeping his hands clean. He’s even buddies with a cop whose life he once saved. Paulo is Bob’s young admirer – handsome, cocky, and obedient to the aged gambler. Bob has a soft spot for any street girl being pimped out, so he takes in Anne, a sultry blonde with permanent bedroom eyes. After a bitch of a losing streak teeters Bob on the brink of bankruptcy, he plans the heist of a casino. Backs are stabbed, dames squawk, and Bob’s fate is sealed by an ironic win at the casino prior to the heist.

Those ideal images of Paris y’see in romantic comedies and that Woody Allen movie where Owen Wilson time travels or whatever have no place in Melville’s universe. The district of Pigalle is featured prominently in the film – a dark corner of whorehouses and gambling dens. Bob lives in Montmartre, a bohemian neighborhood that resembles a neon maze at night (which is the only time the film takes place).

Lurking these perpetually damp streets is a cadre of shysters, two-bit con men, “pavement princesses,” and more respectable folks like Bob. Messages are relayed by bartenders, croupiers are tipped exorbitant amounts, you the chain-smoking is getting outta hand.

The planning of the heist is one of the most visual creative bits. Bob takes his gang to an open field, where he’s painted the layout of the casino on the ground. They practice their walkthrough that way, and if the audience needs more visualization of the plan, Melville cuts to “How Bob Sees the Heist Going.” The entire casino heist is shown, but just as a visual aid. Can’t say I’ve ever seen such a playful device in a melancholy crime film before.

Like I pointe din my review of Le Doulos, Melville wasn’t too keen on writing women parts – his interest rested in the masculine relationships of the underworld. The two female characters in Bob le flambeur boil down to a manipulative wife and a loose-lipped tramp. Ah well, ya don’t go into a Melville looking for feminine insight. The guys are written great though. I was particularly fond of Paulo. Despite his childishness and naive lust over Anne, he’s a very sympathetic wannabe crook.

Bob le flambeur‘s fancy pants Criterion release is outta print, but you can still get it through Netflix. It makes for a nice appetizer before Melville’s classic crime flicks: Le Doulos, Le Samourai, and Le Cercle Rouge.