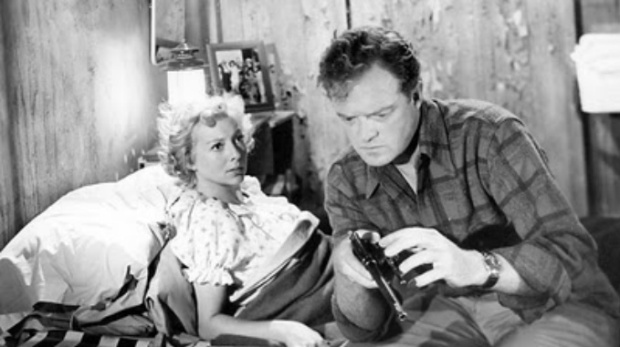 Some cops bend the law for money. Some do it to uphold their uptight version of society. Others, like Webb Garwood in The Prowler, do it to achieve their dream of a house in the ‘burbs with a nuclear family. Middle class aspirations that a cop’s salary won’t allow. He could’ve easily fit in with the riffraff he throws behind bars, but as he explains to Evelyn Keyes, the badge just makes it easier to be a bad person, which makes for an easier path to the good life. Joseph Losey’s The Prowler centers around this particularly despicable corrupt cop, as the film takes the formula laid out in Double Indemnity and throws a bit of sand in its eyes to create its own brand of domestic hell.

The film begins with Webb (Van Heflin) answering a distress call from Susie (Heflin), a prosperous married woman who saw a peeping tom peering through her bathroom window. Webb doesn’t seem so much concerned about the peeper as he does Susie’s body and swank home. Insisting it’s protocol, he returns to her home several times, enjoys her cooking, smokes her disc jockey husband’s cigarettes, and gradually wears her walls of fidelity down. He makes himself right at home. While her husband performs his nightly broadcasts, the two have an affair.

Susie’s by no means a femme fatale who seduces Webb into her bedroom. She’s a lonely housewife whose dreams of having family were snatched from her when her husband revealed he’s shooting blanks downstairs. Webb is charming and is always there for her. Namely, everything her husband isn’t. Hubbie refuses to get a divorce, leaving Susie with an empty household and womb.

Webb isn’t willing to let Susie go either. She’s his mealticket to the good life. So he conceives of a vile plan to get rid of her husband and take that middle class ease he’s always longed for. The root of the plan is the life insurance policy Webb stumbles across while snooping for cigarettes. Now he’s on some Double Indemnity shit, the only hitch is, Susie isn’t in on the plot like ol’ Mrs. Leidecker was. Susie’s just as much a victim as her overbearing husband is to Webb’s ruthless selfishness.

When it was released in 1951, anti-Communist witch hunters in Hollywood read The Prowler as a scathing commentary on the pursuit of the American dream and how the desire of a nuclear family could destroy people. They believed the aim of the film was to undermine the American way. Losey and screenwriter Hugo Butler were inevitably blacklisted as communist sympathizers because of the film.

Nowadays, The Prowler is like any other lunatic cop movie, but I really dug it. Van Heflin (Act of Violence) is perfectly deranged and seething with reserved rage. Near the end he becomes completely unhinged, which is a marvel to watch. I like that Losey moves the setting out of the suburbs and into a ghost town for the film’s final act. It sort of puts the nail in the coffin of domestic bliss.

I heard it was loosely remade in 1992 as Unlawful Entry, so I think I’m gonna check that bad boy out tomorrow and compare.