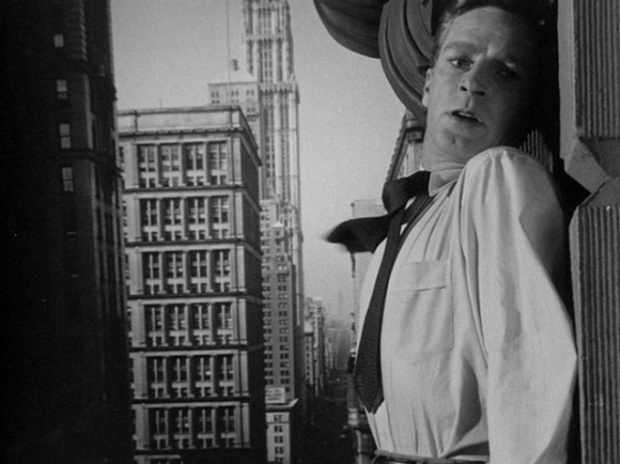 It’s St. Patrick’s Day in NYC. The cops have their brass polished. Cabbies are prepping themselves for hellish traffic. And on a ledge 15 stories above the ground, Robert Cosick is about to swan dive headfirst to the concrete jungle’s unforgiving bosom. Based on the true story of John Warde, who had downtown NYC enthralled for a half a day in July 1938 as he threatened to jump off the 17th story of the Gotham Hotel, Henry Hathaway’s 14 Hours is a terrific drama that’s as authentically human as it is dramatically gripping. John Warde jumped to his death that day in 1938, but there’s a happier close to 14 Hours, one that had to be inserted following the suicide of a 20th Century-Fox executive’s daughter the day the film premiered. Talk about fantasy reflecting reality. Or the other way around. Whatever.

The first officer on the scene is traffic cop Dunnigan (Paul Douglas). He makes a connection with Cosick (Richard Baseheart) and quickly becomes the only one he’ll talk to. Frequently he threatens to jump if any other cops move in on him. Over the course of the film’s 90 minutes, we’re out there on the ledge with Cosick and Dunnigan, with only a few breaks to display the indifference of the citizens below. Cabbies take bets on what hour he’ll jump. A wife filing for divorce in an adjacent office building is moved to make amends with her husband. Two professionals meet in the crowd and decide to go out for a bite when the spectacle is over.

Cosick slowly reveals his despair to Dunnigan. There’s his alcoholic father, his mother who he feels he let down, his ex-fiance, Virginia. They had a rocky relationship, but who doesn’t. As Dunnigan explains to Cosick in one of the most affecting moments in the film, ya gotta be happy with what ya got and screw the bad shit. His wife may not be a “Park Ave. model,” but they share laughs together and she lets him ditch church on Sunday mornings to go fishing for flounder. Paul Douglas was mainly known for comedies when he did 14 Hours. Here he displays a wealth of “everyman” exuberance. And it’s clear he’s the only cop there who actually gives a damn about Cosick. The others just wanna save face in front of the commissioner.

Baseheart was given numerous accolades for his performance as Cosick. A remarkable feat considering he essentially stands still for most of the picture. Despite the lack of room for him to work with, Baseheart digs deep in the emotional well of noirish agony. The scene with his father is particularly harrowing. The rat race, guys, it’ll kill ya if ya let it.

Henry Hathaway’s journalistic style is on full display, as the skyscrapers above and city denizens below make Cosick’s desperate plight seem insignificant in the scope of things. The film was shot in the financial district of NYC, with a tremendous cast of extras. Not just on the street either. In many shots extras are visible in adjacent buildings, leaning out for a closer look. When night hits, the use of spotlights and flares give the blacktop a nightmarish glow.

So like I mentioned earlier, the day the film premiered, the daughter of a Fox executive jumped to her death in NYC. The film was immediately pulled from theaters and the ending re-shot. In the original cut, Cosick jumps, and a street cleaner is seen washing away his remains – just another day in the city, huh? Man, I don’t if I would’ve been able to handle that bleak of an ending. Especially after watching Dunnigan pour is blue-collar heart out to him.

After it was pulled and re-shot, 14 Hours kinda dipped into obscurity for a while. Fox put it out on DVD as part of the Fox Film Noir series. It’s readily available on Netflix so check it out.