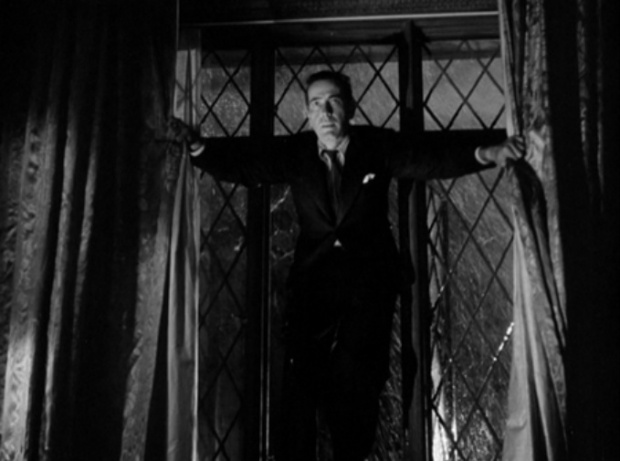 My wife’s mother recommended this Bogie melodrama to me, so I gave it a shot last night. I really like when Bogie got to show his dark side, particularly when he plays a disturbed artist close to the edge like In a Lonely Place. The Two Mrs. Carrolls fulfilled my thirst for a menacing Bogie and then some. Man, he gets some wicked moments in this one. He goes completely over-the-top for the entire third act, but that doesn’t really bother me when it comes to eerie murder mysteries. Over-the-top works in this film and only helps heighten the gothic atmosphere. With echoes of Gaslight, Hitchcock’s Suspicion, and the Bluebeard legend, The Two Mrs. Carrolls is a fine addition to the husband black widower genre. Also, who doesn’t want to see a child steal scenes from Bogie?

The film is based on the 1935 play by Martin Vale, who was actually a woman, Marguerite Vale Veiller. I’m not sure why she used a male pseudonym, but sexism was probably involved. Or she was a man trapped in a woman’s body. Not that there’s anything wrong with that. Bogie stars as painter Geoffrey Carroll, a mentally disturbed romantic who’s cheating on his wife with Sally (Barbara Stanwyck). On a fishing trip in Scotland, Sally learns that Geoffrey is married. He feeds her a load of crap about her being an invalid and that he’s trying to get a divorce. Sally’s not as dumb as he thinks, so she ditches his lying ass.

Then Geoffrey’s wife passes away and Sally falls back into his arms. They move into Sally’s enormous family home, along with Geoffrey’s young daughter (Ann Carter) from his previous marriage. This little girl is a real piece of work. She talks like she’s gone through finishing school a dozen times. Politeness oozes out of pore on her tiny frame.

The scenes she shares with Bogie are hysterical, but chilling as well. It seems like for all of her proper manners and speech, she might be just as much as a sociopath as her old man. Her detachment to the troubles at her home is scary. What she wants more than anything in the world is to  be sent off to a boarding school and be free of the madness at home. I usually want to throw child actors through a wall, but this Ann Carter girl was fantastic.

Slowly, Sally comes to realize that Geoffrey poisoned his former wife, and has the same in store for her. This is where the whole tortured artist motif comes in. He’s inspired by death. The last painting he managed to complete was his ex-wife as the Angel of Death. He hasn’t been able to produce any work since then. So now he’s poisoning Sally to inspire himself once again. Also up in the mix is well-to-do Cecily Latham (Alexis Smith), who’s showing a romantic interest in Geoffrey and incidentally pushing him closer to murdering Sally.

This is the only film where Bogie and Stanwyck shared the screen and while he gets plenty of scenery to chew, she isn’t given so much juicy material to work with. She does begin to show her range towards the end of the film as revelations are made, but for the majority of the running time she’s in a constant state of naiveté as Geoffrey plots against her.

The entire third act of the film, in fact, makes up for any previous shortcomings, such as the blase pace. The finale has a horror vibe complete with banging windows, thunder, and Bogie jumping into a room like a well-dressed gargoyle. He seriously comes completely unhinged by the end and it’s incredible to watch. Check out The Two Mrs. Carrolls if you love seeing Bogie go off the rails in a glorious manner.

Thanks, Mrs. Mother-In-Law, for the recommendation.