I really dug Inner Sanctum the other day – a film based on the popular mystery radio show series (1941-52). Reading more about it, I found out that Universal produced six other films under the Inner Sanctum banner prior to the 1948 one I had watched. All of them are streaming on YouTube, so I decided to do a run of them for the rest of the week. The first one is 1943’s Calling Dr. Death, a murder mystery filled with red herrings, wrapped around some trippy sequences of hypnosis. The complete lack of believable crime solving skills by the law makes it tough to take seriously, but for what Calling Dr. Death lacks in credibility, it makes up for in some really fun psychedelic visuals and breakneck pace.

Lon Chaney Jr. (who stars in all six of the Inner Sanctum films) plays neurologist Mark Steele. He utilizes hypnosis to treat his patients and if that technique is laughable today, imagine what skeptics thought of it back in the day. Steele explains to a patient’s concerned mother that hypnosis can be used to stir up repressed memories the human consciousness found too disturbing to handle. Steele further explains his belief in hypnosis through his raspy whisper narration.

This crazy whisper style narration honestly jarred me, but I cut him some slack because his wife is two-timing him. Steele talks about how amazing it is that he can penetrate a person’s subconscious, but at home his trophy wife Maria treats him like a doormat. She goes out and spends his dough and he gets to come home to an empty house – left to wonder who she’s rolling around in the sheets with tonight.

Like in many noirs (Scarlet Street, The Woman in the Window, The Two Mrs. Carrolls), Steele is taunted by a giant portrait of his wife. If we learn anything from these old crime flicks it’s that men should not own giant painted portraits of their girl. It’s going to fuck them up.

This particular night, Maria comes home around 3am and they get into a huge fight. She mocks his request for a divorce and in a fury, he tells her he’s been thinking about killing her. “You ain’t got the guts,” she replies. Steele gets in his car and drives off, nearly blind with anger. That was on Friday night. Steele blacks out and doesn’t wake up again until Monday morning, in his office.

His secretary/nurse Stella (Patricia Morison) rouses him to let him know the cops are waiting for him. His wife turned up dead, murdered, and he’s the prime suspect. It happened sometime over the weekend, two two days Steele has no recollection of. He thinks he remembers taking some sedatives because he was so upset about the tiff he had with his old lady. At the crime scene, Steele finds one of his jacket buttons and hides this from the police.

Leading the investigation is Inspector Gregg, one of the most inept detectives I’ve ever seen on film. He’s convinced Steele is the killer, but does absolutely nothing to prove it – he seems to be content to accuse the shit outta him while piling up more circumstantial evidence, hoping Steele will crack. Meanwhile, they arrest Maria’s current lover, an architect named Duval. HE’S PUT ON DEATH ROW while Steele remains the numero uno suspect, walking free. What the shit kinda police work is this?!

Don’t worry, Calling Dr. Death isn’t through dropping the ball yet. During the film’s final act, there’s a convoluted bit involving a telephone call that set off a fire in Steele’s office (the hell?). Then the killer is revealed in the final minutes, during a pretty sweet psychedelic hypnosis session. It makes almost no sense and the killer’s motivation is murky at best.

The visual storytelling is rather straightforward, except for during those hypnosis flashback sequences, then director Reginald le Borg has some fun. There are some German expressionistic touches as well as one or two unsuspecting things with sets caving in, which I really liked. Overall Calling Dr. Death has a pretty disappointing conclusion, but the ride getting there is pretty entertaining.

I’ll be back tomorrow with a look at the second Inner Sanctum mystery: Weird Woman. 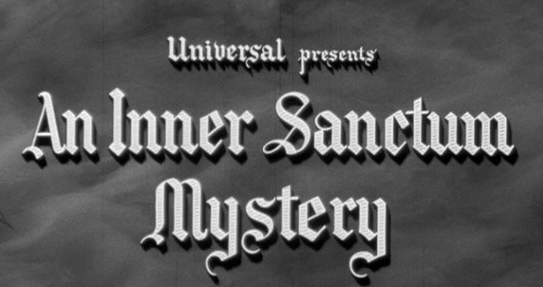