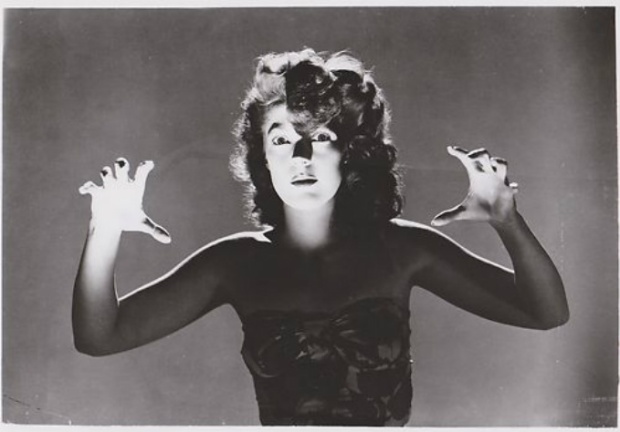 The second Inner Sanctum mystery is Weird Woman, a tale of Polynesian hoodoo and good ol’ American voodoo. Again the film stars Lon Chaney Jr., who reprises his throaty whisper narration that he gave me the willies in Calling Dr. Death. Does he pull the same gag in all of the Inner Sanctum films? Guess I’ll find out. This time around he’s an anthropology professor who’s expertise is the effect of superstition on mankind. It’s very familiar to his Steele character in Calling Dr. Death, and again he’s framed for some heinous shit he didn’t pull. Some guys can’t catch a break, huh?

While doing research in the South Seas, Professor Norman Reed (Chaney) comes across the beautiful and mysterious Paula (Anne Gwynn), an American girls who’s gone native in a way. She’s immersed in the Polynesian culture, right down to its tribal ceremonies and sacrifices. Was this an insulting depiction of the South Seas way of life, probably (definitely). Paula comes back to the U.S. with Norman, where she enrolls in the college where he teaches.

Norman’s on again off again flame Ilona is immediately boiling with jealous rage over the professor’s new plaything. Shortly into Paula’s new residence, bizarre things begin happening around the community. Ilona keeps trying to convince Norman that Paula is no good, hasn’t given up her voodoo ways. One night he follows Paula out of their house, through a cemetery, to the shocking truth! Sorta. I mean, it’s not all that shocking, but it does unravel even more shocking truths perpetrated by Ilona.

That’s the cool thing about Weird Woman. In a way, it reflects modern hypocrisy, particularly in our land of “my religion is better than yours.” Paula is into some old school voodoo stuff, Ilona is a modernist. They never go into her religious beliefs, but she possesses a strong distrust of Paula that’s fed mainly by her disgust in the South Seas mythology and practices. Yet, she’s the one committing all this horrible shit around town. Maybe I’m reading too much into this, but I dug these undertones.

Weird Woman was directed by the prolific Reginald Le Borg, who helmed a few of the Inner Sanctum mysteries. Just like in Calling Dr. Death, Le Borg has a lot of fun playing with trippy dream sequences. He utilizes double exposure and wavy transitions to create a disorientating atmosphere, given extra weight by Chaney’s paranoid performance.

I really liked Weird Woman more than Calling Dr. Death, it was just more effective for me. And there was no imbecile cop there to drag it down. Check it out on YouTube if you’re looking for a fun little macabre thriller.