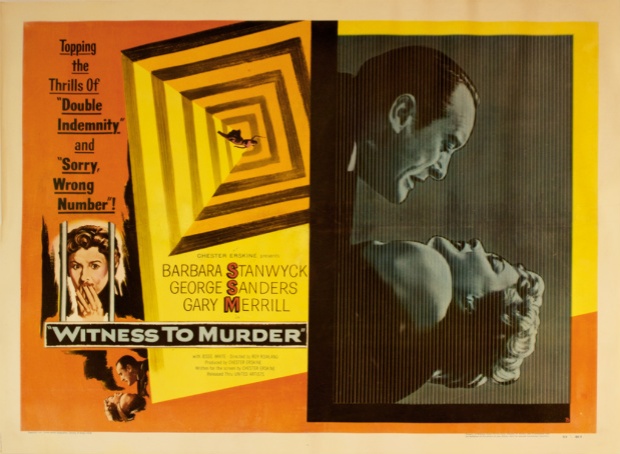 Why won’t anybody listen to Barbara Stanwyck?! Witness to Murder had the unfortunate timing of being released shortly before Rear Window. Both films share a similar paranoid peeping tom premise, but Witness to Murder lacks Hitchcock’s polish. The film received positive reviews, particularly for John Alton’s camerawork, but Rear Window completely overshadowed it in the long run. There’s plenty to enjoy here though, including a devilishly wicked performance by George Sanders as a refined sadist.

The opening credits play over a booming soundtrack as a brutal murder is framed in a window across the street. Cheryl Draper (Stanwyck) sees the whole thing – an older man savagely choking out a young woman. She reports it to the police, but when they investigate the apartment of Albert Richter (Sanders) across the street, no sign of a body is found. Richter knows it’s Draper who snitched, which leads him to gradually make the cops think she’s insane. He totally gaslights her!

And it works. Draper is committed to an asylum, where she shares a padded room with a handful of other supposed female loons. The only one sympathetic to Draper’s plight is Lt. Mathews (Gary Merrill). He gets her released and tries really, really hard to nail Richter. The old timer is just too slick for them though, and Draper starts to think maybe she really is crazy. But Richter has no intention of sending her back to the asylum…this time he’s aiming to send her to the grave!

As Mathews’ snooping starts to unravel some sketchy shit about Richter, it’s amazing that Draper is still considered insane. She’s portrayed as a mentally unstable victim the entire time, with less credibility than an ex-Nazi who has published books declaring that violence is the key to mankind’s progress. Yeah, Richter is a freakin’ ex-Nazi who writes about the importance of violence, the whole world knows it, yet Draper is thrown in the looney bin. The film really lays on the “She’s just a crazy woman!” routine pretty thick – a staple of 1950s Hollywood.

Draper’s trip to the asylum marks a shift in the film’s tone. Before she’s institutionalized, Witness to Murder plays like a swiftly paced thriller. Upon her release, it vibes more like a silly melodrama. Stanwyck continues to act the hell out of the film though, making the audience sympathize with her throughout.

The final act sees Richter going full Nazi – bellowing in German with fanaticism in his eyes, spitting some rubbish about the inferiority of nonviolent human beings (or something like that). It’s obvious Sanders was having a lot of fun with this role – over accentuating his dialogue and being oh-so over confident in his clothes. Richter is the kind of villain who only uses women as his pleasure toys and it’s clear he takes a subtly sexual pleasure in turning Draper into a quaking bundle of fear.

Stanwyck doesn’t just sit their and shake in her heels the whole time though. Even during the film’s more ridiculous moments, she acts with such certainty that the entire story remains grounded. It seems at times like she easily gives in to Mathew and even Richter’s suggestions at times, but Draper isn’t stupid – she’s quite intelligent and knows herself very well. That’s evident in the paintings she does, which she explain to a doctor at the asylum help her tune into her emotions. Complex female characters were rare during this period, but Stanwyck was a resolute actress who knew if she wanted to play a female with depth, she’d have to create the character herself by acting between the lines. I think she brought a lot of that to Cheryl Draper.

Witness to Murder may not be a slick as Rear Window, duh, but it’s a noble little noir with a lot of suspenseful moments to offer. My one major beef with the film is that its Mathews who eventually cracks the case, not Draper. All the shit she goes through in this film – from being institutionalized to being forced off a building – you figure they’d give her some of the glory. That just wasn’t in the cards for a female character in the 1950s, sadly. But this is Barbara Stanwyck we’re talking about. Her talent and intelligence is able to elevate the Draper character above simply being the victim. She creates a thoroughly interesting, resolute, and sympathetic role. Just listen to her next time, guys!