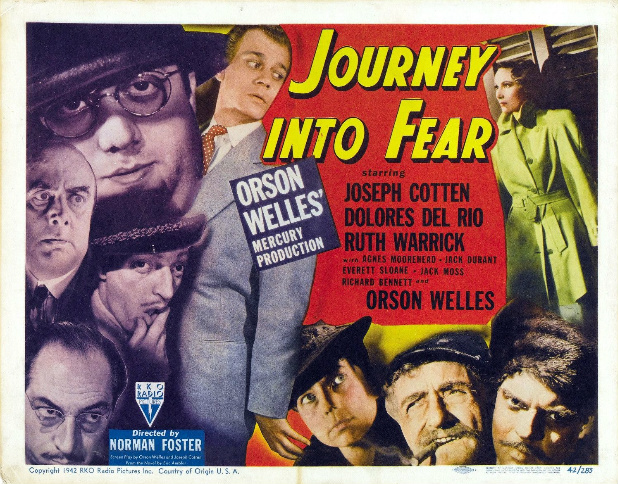 Based on an Eric Ambler spy novel, Journey Into Fear is a wartime thriller starring the mighty Joseph Cotten, who also happened to write the screenplay. Written by and starring Cotten? What could go wrong, right? Well, the tone kinda see-saws throughout the film until it becomes a weak shadow sacrificed in the name of style, which Journey Into Fear has coming out of its ass. Orson Welles produced the film and insisted on taking the directing reins from Norman Foster for his own scenes as the monstrous Turkish chief of secret police. Welles’ fingerprints are all over this sucker, in fact, from the amazing opening shot to the nightmarish final chase. Overall its a fun little film, one that kinda gets forgotten in the shuffle of Welles’ Magnificent Ambersons debacle the year before.

Man, opening shots don’t get more cool than this. A camera cranes up to an apartment window. Through it we see a well-dressed obese man with a baby face cranking a gramophone. As an opera record begins to play, he turns to a mirror and begins combing his matted, greasy hair to the side. The record keeps skipping, frustratingly playing the same high notes as the fat man primps. As the record stops, he checks the magazine in his pistol and exits.

Every second of that shot is dripping with sleazy menace – it’s so good. Then we’re introduced to Howard Graham (Cotten), an American engineer on assignment in Turkey. He becomes a target for the Nazis, including that fat assassin (Jack Moss) we watched groom himself in the beginning. Colonel Haki (Welles), helps Graham sneak out of Turkey aboard a ship, only to find that the boat is littered with more Nazis. In order to survive the trek, Graham must forge alliances and do some detective work to figure out who wants him dead and why.

About 90 percent of the film takes place on this cramped ship, making for some extremely claustrophobic, paranoid little set pieces. Being such a small ship, Graham is able to overhear conversations, spy on double crossers, and sit in on some poker games during his down time. It’s actually pretty light fare that never truly dips into intensely emotional territory. The noir dramatics at play, such as the wrong man motif, are fairly light. “Romp” is a good word to describe Journey Into Fear‘s tone.

Visually it owes much to Welles’ flair, which apparently caused some beef between him and director Norman Foster. After the film’s release, some folks gave all the credit to Welles. It’s a fact that Welles directed all of the scenes he was in (only about two or three), but shit, the whole shebang seems to have his paws wiped all over it (especially that badass prologue). Maybe Foster just bit Welles’ style to make it a stylistically cohesive film. Either way, fans of expressionistic noir visuals will find a lot to enjoy here.

The tone, sadly, begins to drain out near the end. Journey Into Fear is only about 70 minutes long, but all the time spent on the boat starts to suck the vitality from the story. The climactic chase on shore, however, picks things up again nicely. I couldn’t help but think Ridley Scott was influenced by this rain-drenched chase on the side of a building when he made Blade Runner. It’s such a slow-moving, tense pursuit with an interesting role reversal between the cat and the mouse. Much like the end of Blade Runner, the pursuer becomes the one getting chased down on the side of a building.

Orson Welles next film was the noir classic The Stranger (1946), but Journey Into Fear was one of the last times the studio system allowed him to do whatever the hell he wanted without suits breathing down his neck. It’s a fun film, with Cotten delivering a solid performance (as always – I love that guy!). The cat and mouse on the ship does become a little tedious, but hell, it’s only 70 minutes long. Check out Journey Into Fear for some light-hearted espionage action.