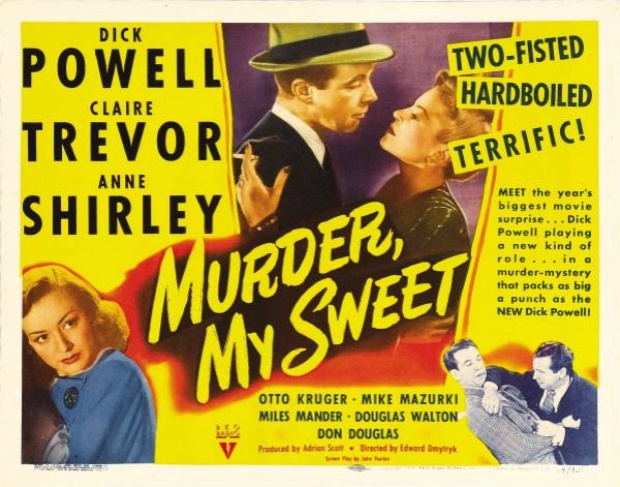 After several adaptations by RKO Pictures of Raymond Chandler’s work that barely resembled the legendary writer’s source material, producer Adrian Scott finally managed to create a faithful one that captured the author’s wit and charm while also shaving down the book’s convoluted plot into something coherent. 1945’s Murder, My Sweet is based on Farewell, My Lovely (1940), the second Philip Marlowe mystery. I guess the marketing folks at RKO thought “Sweet” was a more effective pet name than “Lovely.” The film is certainly one of the most clearest versions of Chandler’s vision, even if its noble private eye yarn would later feel old-hat in the world of noir.

This is the fifth Philip Marlowe film I’ve seen and I think Mr. Dick Powell (Pitfall) does a pretty good job filling he gumshoes’ shoes. Elliot Gould will always be my favorite (that swagger!), Bogie is great (though he pretty much got away with playing himself), and Robert Montgomery’s performance got lost in the POV gimmick of Lady in the Lake. Powell is a slightly more polished version of Marlowe than the others. He may sport some stubble and wear a suit that looks like it got washed with gravel, but he can’t hide his exuberance. He doesn’t seem weary enough to be Marlowe. It feels like he just fell off that turnip truck. Nevertheless, he’s a charming who sticks to Marlowe’s rigid code of ethics.

For his novels, Chandler essentially cannibalized his short stories to fill out a few hundred pages or so, which led to some painfully complicated plots. It’s never really about the case though. Like with most noir detectives, Marlowe’s always after the big mystery of life, fate, doom, etc. And it always slips through his fingers.

For Murder, My Sweet, screenplay writer John Paxton and director Edward Dmytryk (The Sniper) stripped off extraneous plot points of Chandler’s novel to focus on the missing woman, Velma (Claire Trevor), and some missing jewels. Powell’s first person narration injects the mandatory reflective nature of Marlowe. This was before reflective narration was a noir standard, making it just one of the ways Murder, My Sweet helped pave the way for the standard noir look and structure everyone is familiar.

The film is also presented in flashback form, with the film beginning at the end and Marlowe retelling his story to the cops. Some of the disturbing angles appear lifted from Citizen Kane (in turn lifted from Stranger on the Third Floor), but there’s some interesting lighting going on that contains impossibly deep shadows and framing that feel wholly unique to this charming ass thriller.