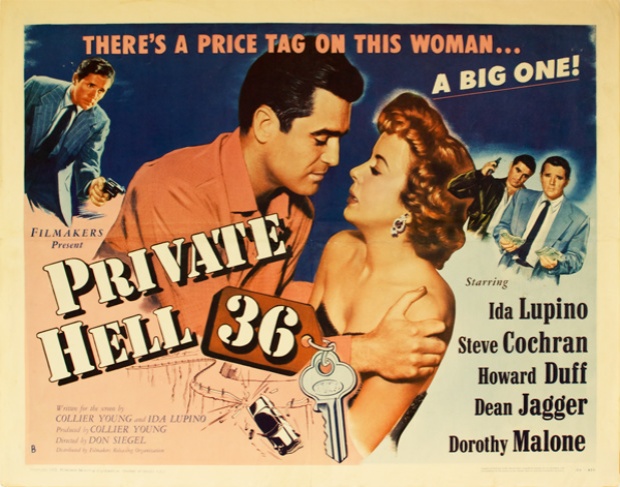 So far on this journey through noir, the meanest crooked cops I’ve come across are featured in Where the Sidewalk Ends and The Prowler. Hell, the latter is going to be nearly impossible to beat. But here’s another bullet-proof example of noir’s police force with polished palms and bulging pockets, as well as the lengths they’ll go to saddle a dame. Co-written by the queen bee Ida Lupino, Private Hell 36 is a subtly smart film that mounts and screws the idealism of the mid-1950s. And looks good doing it.

Private Hell 36 was directed by a young Don Siegel, the man behind The Killers (1964) and Dirty freaking Harry, with the almighty Sam Peckinpah as a dialogue director. He was probably volatile and hopped on cocaine during the time of shooting, as every web article about Sam would lead you to believe. Lupino was one of the co-producers of the film, along with her ex-husband Collier Young. But by the time the cameras were rolling on Private Hell 36, Lupino was married to Howard Duff, one of the film’s leads. Slightly awkward, I guess.

The film begins with a thoroughly impressive display of 1950s stunt work. There’s a ridiculous brawl between Farnham (Duff) and a couple of small time hoods in a department store. Bodies are chucked through windows, an unconscious man is savagely beaten, and Farnham dusts himself off. It’s great stuff. This seemingly innocent robbery leads to a much bigger caper that requires the help of night club singer Lilly (Lupino), who can identify a wealthy punter. If the police can get her to cooperate, that is.

An innocent use of blackmail turns into a powerful bit of noir, in which the straight and narrow must do battle with opportunistic cops.  But what is most interesting is how damn clever the initial crime is. I’m talking about the crime that sets off the entire film – the heist of a bank deposit. Farnham and his partner are tasked with locating one $50 bill that shows up – and from there shit turns sour. Brilliantly, we never find out who is behind the initial crime, just how the aftermath affected one crooked ass cop. It’s a simple suggestion concerning crime that affects everyone, everywhere, ANYTIME.

Private Hell 36 is a brief B-noir, but an influential one. It’s one of Id Lupino’s films, meaning it’s one of the earliest independent joints you should pay attention to.

Olive Films just released a stunning transfer on Blu-ray, so check that mother out if you can.