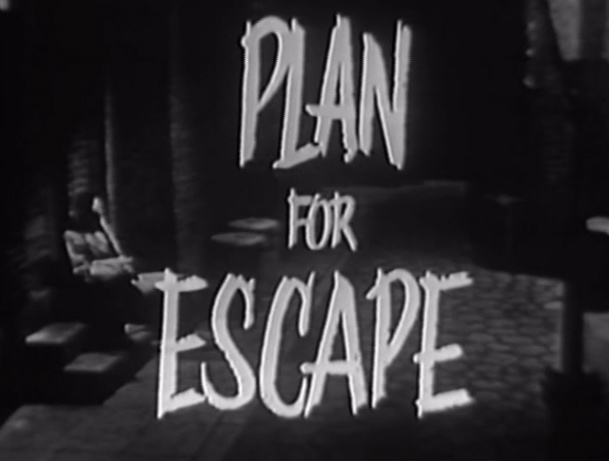 Plan for Escape was part of the Emmy-winning CBS series Studio One (sponsored by Westinghouse appliances, a point that’s made several times during the program), a weekly series that ran for a whopping 10 seasons. The program originated as a weekly dramatic radio show, then transitioned to television during the late ’40s. Watching this 60-miute drama, I couldn’t help but yearn for something like this on contemporary TV. Not to complain about the “golden age of TV” that’s been going on since The Sopranos, but programming is lacking a weekly anthology like this one. Just one hour that presents a good old-fashioned drama with hot shit actors. My kingdom for a show like that right now.

Anyways, Plan for Escape focuses on the girlfriend of a wealthy gangster who’s sick of being confined and looked over. It’s a fairly straightforward story with a misleading title, though the finale is elevated by sharp direction and a taught showdown.

Peggy Ann Garner stars as the Honey, who’s fed up with being babysat. She’s a former chorus line girl and she’s aching to hit the street and revisit the old dives she left behind since becoming Dave Weber’s arm candy. He attempts to make up for this confinement by showering Honey with spending money and shopping trips on Park Ave., but she wants some action. When Dave is gunned down by a rival gangster, Honey sees her chance of escape.

It’s not a “plan” for escape, mind you. Don’t buy the misnomer. She just kinda stumbles from place to place, until kindly train station attendant Alan Wall (Frank Overton) takes her in, somewhere in Idaho where the Chamber of Commerce didn’t pay mind to. There Honey finds an uncomfortable silence amongst the Walls and the other locals. She’s so used to living in fear, under someone’s well-dressed thumb, that these warm yokels put her on edge.

Throughout, Garner delivers a trembling performance that grips for the whole hour. There’s a great scene early on in a cabaret dressing room where he past is revealed, and from there it becomes clear that her upper class aspirations have damned her lower class demeanor. Until the film’s claustrophobic finale, she consistently brings the heat. This is Garner’s show and she bears it very well.

The episode was directed by Paul Nickell, who helmed ONE HUNDRED AND THIRTY NINE episodes of Studio One, so you know homeboy knew what he was doing. I can’t front, this is the first one I’ve ever seen, and I gotta say the directing was really sharp. Particularly during the climactic brawl, when the camera moves in and out of the action real sexily. The story isn’t very original or suspenseful, but Garner’s performance and Nickell’s direction makes it a solid hour of criminal entertainment.