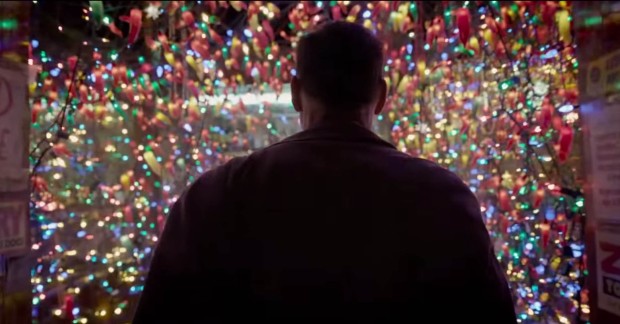 Christ, where do we even start? Birdman (or The Unexpected Virtue of Ignorance) is an unclassifiable visual feast that flirts with realism and fantasy. It’s a technical wet dream that unravels in real time, in a simulated one take. On the surface it’s about an aging actor struggling to stay relevant and reclaim his declining celebrity, while its undercurrents explore the madness of the industry.

The film and his role are entirely built around Keaton, whose has-been status as OG Batman makes him the perfect fit for ex-superhero actor Riggan Thomson’s tightie whities.

That’s how we’re first introduced to him – floating off the ground in lotus position in his underwear. Instantly we’re put into a world where anything can happen. Later Riggan shows off telekinetic abilities and even flies like the titular superhero that’s always lurking in his subconscious. It’s never explained if Riggan’s fragile psyche has already fractured or if it’s on its way there. The movie never pauses to allow us to think on it but it does make sense later on, when we realize how strong Riggan’s desire is to be in control. His little fantasies make him god.

He’s prepping for the final rehearsal of his self-adapted, produced, and directed Broadway production of Raymond Carver’s “What Do We Talk About When We Talk About Love.” His future depends on its success for a litany of reasons. As his junkie daughter Sam (Emma Stone) points out, he no longer matters. Nobody cares (“You don’t even have a Facebook!”). Her sense of worth is measured in Twitter followers, something Riggan knows nothing. Then there’s his co-producer Jake (Zach Galifianakis), who’s measuring their success by receipts and asses in the seats.

For Riggan, social media presence and box office totals are secondary to proving his worth to a NY Times theater critic who’s already sharpening her knives before she’s even seen the production (“You’re a celebrity, not an actor.”). He doesn’t want to go down in the annals of history as the guy who used to be Birdman – he wants to be taken seriously as an artist.

It’s easy to see how the lines have been blurred between ex-Batman Keaton and ex-Birdman Riggan. Filmmaker Alejando González Iñárritu (21 Grams, Babel) wrote the movie with Keaton in mind – exploring the actor’s former-diva status while poking fun at it. But if Riggan is a washed-up pain in the ass, he can’t hold a candle to Broadway egomaniac Mike Shiner (Edward Norton, a notoriously difficult actor in real life). He’s a last minute addition to the cast and upon arrival, he’s already memorized the script and even made it better. Again, Riggan’s losing control.

This world of power, celebrity, and madness is explored with unrelenting motion through Iñárritu’s camera. Gravity cinematographer Emmanuel Lubezki’s use of Steadicam appears seamless as the camera wanders backstage, onto the streets of Times Square, and everywhere in between (transitions were sewn together in post, obviously). One particularly impressive shot takes the camera up into the rafters and back down to the stage in one fluid motion. I honestly have no clue how they pulled it off.

The impressive technical feats never detract from Keaton’s performance though. They add weight to the sense that Riggan’s losing control. Grizzled, greying, and gravelly-voiced, Keaton is fascinating to watch as he tries to keep up with all this movement. It’s an ironic role pulled off with fierce determination by the 63-year-old actor. People talk about “raw” and “brave” performances all the time, but Keaton’s turn here is the real deal and he does it all while putting his post-Batman career into new context.

The entire cast gets their turn to shine. Norton relishes playing the dick, Stone adds dark passion to a role that could’ve easily been shallow, and Galifianakis gets his most human turn yet. Naomi Watts and Andrea Riseborough also shine.

I wish more filmmakers had this type of chutzpah. I’ve never been a big fan of Iñárritu’s films, they always seemed like cynical bummers to me. With Birdman, the Mexican filmmaker has a stupid amount of fun flipping off mainstream cinema and this cynical age we live in. It’s a joy to watch because it offers these riffs on the shallowness of media, but it’s funny enough to enjoy without understanding the message. Hell, it might even be more enjoyable if you disregard its meaning and just have a laugh. After all, its subtitle is The Unexpected Virtue of Ignorance.