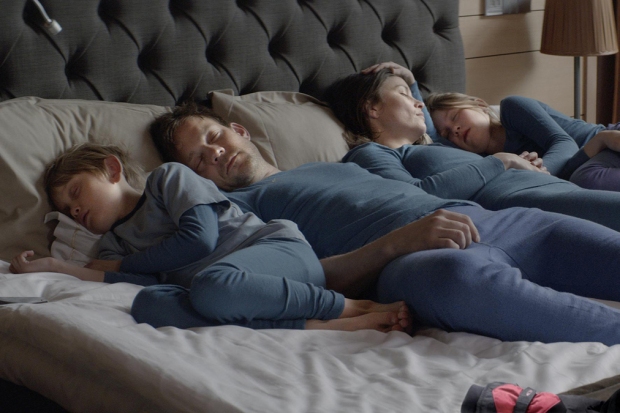 At some point in every relationship there comes a test of sorts that reveals the true crux of its foundations. Like farting in front of your spouse for the first time or running away during an avalanche. In director Ruben Ostlund’s brilliant Force Majeure, it’s the latter event that fractures a seemingly happy marriage. This wickedly sharp-eyed Swedish export explores the trappings of marital complacency and the deceptive appearance of security. While Gone Girl took on similar themes earlier this year in an extreme, tabloid manner, Force Majeure’s sensibilities are more in the line with a slowly burning melodrama (think Michael Haneke, if that helps).

The couple on the chopping block consists of Tomas (Johannese Bah Kuhnke) and Ebba (Lisa Loven Kongsli), who are vacationing at a ski resort in the French Alps with their two young children in tow. On their second day, while lunching on the resort’s rooftop café, an avalanche roars down on them. Tomas grabs his phone and runs for cover, leaving Ebba and the kids behind. When the snow settles it appears no harm was done, but Ebba is shocked how quick her husband abandoned the family in a dangerous situation. Throughout the rest of their trip, Ebba talks about her husband’s cowardly actions, bringing it up in uncomfortable exchanges with others staying at the resort.

While there’s some evidence of resentment earlier in the film, the leak truly springs after the avalanche. Ebba turns cold and distant, disinterested in skiing as a family. Tomas attempts to maintain the illusion of serenity but his hangdog manner betrays his supposed happiness. Over dinner with friends later that night, Ebba brings up the incident, implying Tomas cared more about saving his phone than his family. Tomas laughs off her side of the story, but the damage is already done.

Their escalating conflict bleeds the vacation dry. Their kids (played by real-life siblings Clara and Vincent Wettergren) flinch and cry at any sign of an argument. Tomas starts to crumble as he’s forced to confront his own flaws. In one painful scene, he grovels in front of Ebba, explaining how he’s also a victim in this situation (gimme a break, man). When another couple comes to visit, the men try to defend Tomas’ flight instinct in a variety of ways, going as far as to infer it was a manly and honorable decision to run. It becomes a battle of the sexes that erodes both parties long after the conversation is over.

The movie falters after their evening with the other couple, Mats and Fanni. This pair continues to argue about Tomas’ decision into the night and Ostlund gives them far too much screen time. Anytime Force Majeure moves away from Tomas and Ebba things tend to drag a bit. The pair has such an uncomfortable chemistry onscreen that when the camera leaves them, I felt fearful, like one of their kids, that when they return the divorce papers will already be signed.

How men should behave and what happens when we don’t live up to those expectations is a major talking point of the film. Remember that episode of Louie where the bully threatens him in the donut shop? It’s like that, but stretched nearly two hours. The film also looks at gender stereotypes from both sides and examines their toxicity. Both partners are forced to question the relationship and shed the false security that denial brings.

Ostlund displays incredibly assured control with Force Majeure. Kuhnke and Kongsli deliver powerful performances, but this is ultimately a director’s film. Ostlund knows exactly what he’s doing and he eloquently handles this heady material. There’s a sense of doom that hangs over the film, juxtaposed against the resort’s perfect symmetry and the beauty of the surrounding landscapes. Both a well-crafted dark comedy and an unsettling study of a marriage in turmoil, Force Majeure challenges the roles we assign each other and the inherent ones doled out by society.