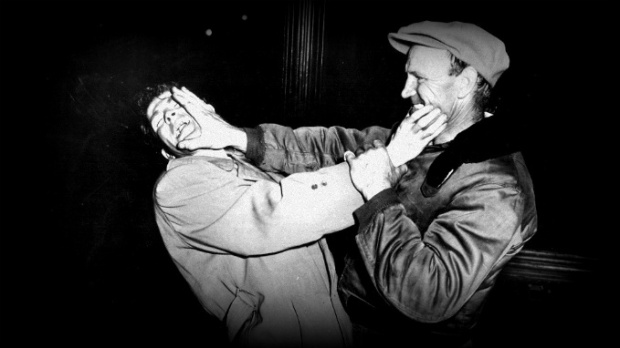 This week at the Hardboiled Hangover, we’re taking a look at some films based on the books of Mickey Spillane – the prolific pulp maestro of sex and carnage. During his time on earth, Spillane (1918 – 2006) sold tens of millions of books, most notably his Mike Hammer series. A private detective who was fueled by rage and moral righteousness, Hammer was a misanthrope who preferred beating confessions out of anyone rather than question them. Spillane put the hard back in hardboiled, with Mike Hammer as his literary tool for vengeance. He certainly wasn’t going for deep insights into the human condition. Mickey wrote to get paid and his books were all about instant gratification of the two-fisted sort.

I, the Jury (1947) was the first Mike Hammer novel published and the first film adaptation. The novel became quickly notorious for its final line, which has become one of the most infamous bits of dialogue in crime fiction history. Ask around, someone will tell you. I, The Jury the film was released in 1953, when cinema wasn’t nearly explicit enough for Spillane’s brand of pornographic justice. This toned down version of the book pretty much follows the same plot, which is a convoluted one that begins with a simple murder and leads to an international art black market, hypnosis, and lots and lots of fisticuffs.